Volunteers reach out to 7000 people in Cape Verde2 min read 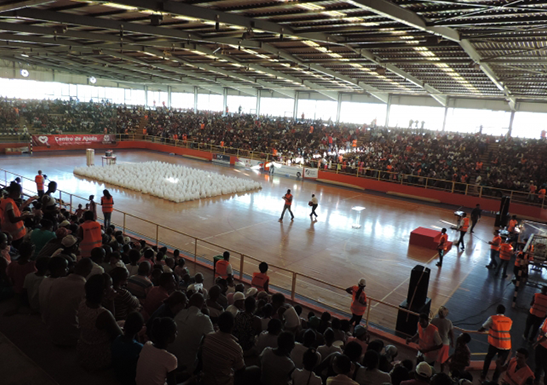 In the country of Cape Verde in West Africa, a small group of volunteers reached out to more than 7000 people on December 20th of 2015. Families in the community gathered at the Vavá Duarte Sports Stadium to receive food baskets, spiritual support, and to participate in prize-winning activities organized and sponsored by the Associação Coração de Ouro (Golden Heart Association) formed by volunteers of The Universal Church.

For the great majority of those present (about 6000 people), it was the first time participating in a social event sponsored by The Universal Church. The main highlight of the event was the prayer made for the families ministered by Pastor José Silva, responsible for the work of the church in the country. “Many people look for The Universal Church because of their problems, such as poverty, unemployment, and addictions. The Golden Heart has offered support to the local families in the areas of education, health, and through the work done by the Night Angels, who takes to them care, attention and a word of faith and hope,” explains Pastor José Silva.

“I was lost and now I’m found”

The Universal Church arrived in Cape Verde 21 years ago, and in spite of the challenges it faces it has maintained its doors open to rescue those who feel lost such as Nair Leite (photo). She shares that putting her faith in God was her last hope.

“I did not have peace nor the will to live. I attempted suicide many times but never succeeded; there was always something inside of me that impeded it,” Nair remembers.  She felt frustrated for having an inner void that nothing could fill. Because of this, she became an explosive person, argued constantly with her mother, frequently visited bars and began using drugs.

In the midst of so much suffering, she came across The Universal Church. From that moment on her life began to be transformed little by little. “When I arrived there, I was very well received. Jesus touched me and stretched out His hand to help me. I was lost and now I’m found,” says Nair.

The Universal Church in Cape Verde is well known for its community service projects. Recently, the event “Learn to Say No” gathered 90 thousand people in 14 Cape Verdean cities. The event was recognized by Cape Verdean authorities, who pointed out the church’s effectiveness in its community service projects and asked to intensify the efforts to bring awareness among the youths about the dangers of drugs and criminality.