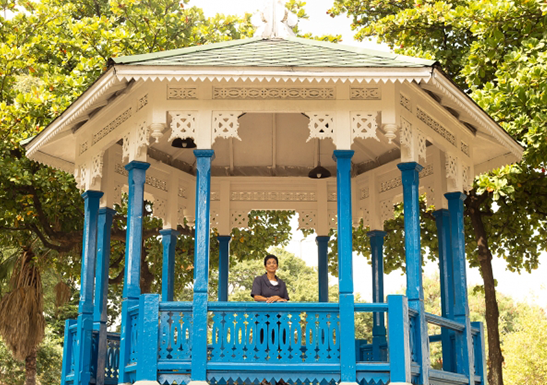 This was the hymn that echoed every Saturday afternoon in the Jardim do Méier (a public square/garden) in the northern part of the city of Rio de Janeiro, Brazil. There, young Edir Macedo, then an evangelist, used a public bandstand to make his first meetings of faith. The music played by the small keyboard with other sound equipment, which he would bring in his car, called the attention of those passing by. “The work was short and straightforward. We gathered the people, announced the power of Jesus, sang a traditional hymn, and cried out to God for miracles.” Bishop Macedo describes in his biography: Nothing to Lose.

Although the area of the bandstand was dirty and had a strong stench of urine, those who walked by and saw that movement of faith taking place knew that something unconventional and special was happening. “Even though I was only an evangelist, with no experience in spiritual deliverance, I dared to cast out evil spirits from the lives of those who watched me,” recalls the bishop. “I’d stand and give a teaching from the Gospels. I always talked about Salvation and prayed for those who wanted to accept Jesus.”

Saturday after Saturday, the number of people who attended faithfully to these meetings at the bandstand would increase, and the seeds of faith that were planted there bear fruits until today.

“Every once in a while to this day, I meet people, usually elderly, who talk about how they were saved by one word they heard at that filthy, foul-smelling bandstand. Time has erased these messages from my memory, but they changed the lives of people I never saw again and will perhaps never see for the rest of my life,” says the bishop in Nothing to Lose.

Such is the case of Maria das Graças, who commuted every day in a bus that passed by that area.

In the midst of the way

At the time, housewife Maria das Graças de Souza Bias was 32 years old. For four years, she had been commuting daily to the Army’s Central Hospital in the capital of Rio de Janeiro due to an acute health problem her 4-year-old daughter had.

One afternoon, she heard words that would spark the change in her life. “On the way, there was a bus stop in front of the Jardim do Méier, where the bandstand was. In one of these stops, I heard words I had never heard before, which spoke strongly inside of me and did me good,” remembers Maria das Graças.

These words came from the young preacher Macedo, and they caused such an impression on her that every day she would look attentively searching for the man that spoke those words from within the bus.

Until one day, she saw that he was there, and she got off the bus and came closer to listen. She heard a little and soon had to leave because of the hospital appointment. On the third time attending, she decided to stay until the end.

“I met the true God that I did not know. I did not stop there because I needed deliverance or my daughter’s healing. I stopped there attracted by the faith with which he spoke. He spoke with such conviction what God could do our lives,” she remembers.

She kept going, and one day she gathered the courage to speak to the young preacher. “My daughter is sick,” she said. He reached out to me with that loving kindness. My deliverance, my daughter’s healing, my walk with Jesus started there,” she recalls.

Soon the church was inaugurated in a place that used to be a funeral parlor. She was not aware of it. “I stayed 3 months without knowing where they went. Until one day, my sister called me and said that a man was doing marvelous things near my house. This man was that preacher. I never saw such a great gathering of people seeking Jesus such as in that place.”

In the first Universal Church in the Abolição neighborhood, after having her true encounter with God and overcoming all the problems she was facing, Maria das Graças was raised as an assistant of the church. Through her faith, all her family began to seek the presence of God, and her daughter was fully healed.

Today, Mrs. Maria Bias is 71 years old and has completed 39 years of serving in the Word of God. She shares with us how these years have been for her. “I do the Work of God in everything; I do not limit myself to anything. If God asks me ‘do this,’ I do it because if He asked me is because He will enable me for that. Moreover, by the mercy of the Lord Jesus, I am ‘killing a lion’ a day while remaining firm, always looking at the promises, to what God has promised to us, because if I were to look at other things, to other directions, surely I would have already fallen. However, I look to God’s promises, in obedience, and I keep persisting and resisting until the day Jesus returns or that He takes me in my death.”

With this same conviction, she speaks about the church that led her to know the living God: “It was through The Universal Church that I found Jesus to have life. It was through this open door that I found Him. I always say that regardless what happens or whatever comes my way, I will not turn my back on my Lord Jesus nor the Church.”

To Bishop Macedo, that young preacher with words full of faith and life, which caught her attention while she commuted in the bus, she sincerely says:
“I am thankful for him having this same trust in God, for having left everything behind, not looking after himself for the sake of the souls, because I am one of these souls. Jesus used those words, and I was set free.”

As Bishop Macedo describes in Nothing to Lose, “That bandstand produced faithful members and assistants, and even bishops of The Universal Church, many of whom have departed from this world. Men and women born from the Spirit that multiplied throughout the world. There was as much salvation at that time as there is today.”

In the following days, you will be able to read posts about the 40 years of the journey of faith of The Universal Church on Bishop Macedo’s Blog and here on our site. The anniversary of the church will take place on Sunday, July 9th.

(Translated and adapted from text by Núbia Onara)