The first temple of The Universal Church3 min read 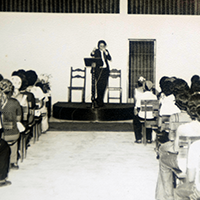 On that Saturday morning of July 9th, 1977, the neighborhood of Abolição in Rio, Brazil, witnessed an unusual gathering of people because that was the date scheduled for the birth of the very first temple of The Universal Church. It was a special day for those who used to attend the prayers at the public bandstand in Méier and waited patiently to have a place where they could receive the word of faith and reach out to others who were in need of help.

After waking up, young Pastor Macedo put on his best suit and went on his way to the old Avenida Suburbana 7248, filled with joy. God had answered his prayers and opened the doors. The chosen building, which used to be a funeral parlor, received 225 people in the inauguration meeting. After its opening, the church received more than 400 people daily.

In the first book of his autobiographical trilogy Nothing to Lose, Bishop Macedo shares details about the days that preceded the birth of the first temple of The Universal Church. Read below:
“A few days earlier, we had taken care of the minimum details to make the property functional. We painted the walls, scrubbed the floors, fixed the bathrooms – a full cleanup. The carpenters, hired at cost, finished the last adjustments to the altar and the pulpit. The wooden benches, purchased in endless installments, were positioned to receive the new people.”

This dream only became possible because of Mrs. Eugênia, also known as Mrs. Geninha, mother of Bishop Macedo, who helped him to rent the place of the old funeral parlor, putting her only apartment down as a collateral:
“She signed it, and we moved forward. On July 9th of 1977, the first meeting took place at the Igreja da Benção (Church of Blessing), which two years later would be named The Universal Church of the Kingdom of God permanently. In spite of the difference in the title, this date was instituted as the official date of the birth of The Universal Church.” (translated and adapted from the book O Bispo – A história revelada de Edir Macedo)

The first of many

Three years after the inauguration of the fist temple of The Universal Church, other churches were opened in Rio de Janeiro, São Paulo, throughout Brazil and later in more than 100 countries worldwide. Today, thousands of temples are open daily throughout the world, in which men and women of faith and courage spread the Gospel to those who are suffering.
Surely, there is or soon will be a temple of The Universal Church near you. Feel free to make a visit today and experience for yourself the benefits this work brings to the communities it reaches. You can find a list of our locations in the USA by clicking here.

(Translated and adapted from text by Sabrina Marques)