My “husband” speaks with his Ex Wife4 min read

In the ‘School of Love Answers’, the student Daniele shares how she is going through conflicts in the marriage because her husband still maintains contact with the ex-wife. She does not know how to handle this situation. See the response of counselors Renato and Cristiane Cardoso.

Daniele–I’ve lived with my husband for six years, but we’re not officially married by court.

We have a 5-year-old daughter together and he has another 12-year-old daughter with his ex-wife. Whenever he picks her up at her house he’s talking to the ex and it bothers me a lot. I usually tell him that he does not have to go up to the apartment, that he can pick up his daughter from the reception of the building. And we always fight because of it. He already betrayed me with the ex, and not even because of that he avoids her. He says he’s not interested in her, but I know he likes to know she’s still waiting on him.

RENATO– So look at the situation: people come into such complicated situations, so things get foggy, there is no light or dark clarity, black or white, it’s a gray, you do not know if it’s more white or to black. She has been with this man for six years and they are not officially married on paper.

CRISTIANE: She must be with him right from the time she got pregnant, because of her age, which is 5 years.

RENATO– And the former partner still feeds the hope of him coming back, and he also does not leave this situation because he “betrayed”. If he is still married to the ex, even if it is in his head, he is betraying her. I know that in practice it’s supposed to be a betrayal because he’s with you right now, but the other side of that coin is that he never married you, so in his head he’s having the best of both worlds. Is he having a lover or a woman? Because it’s in his second relationship, but he had his wife, with a daughter and now a variety to choose from.

CRISTIANE:When the woman goes to live with the man without any commitment to marriage, she is putting herself in a situation where he can someday just come out and say, ‘Oh, I do not want any more.’ And what happens often? The woman will have a son thinking like this: ” I will have a child here and he will stay with me, now we have a family. ” But the son holds no marriage. He has a daughter with the other and is with you. So you have to understand, first of all, that you have put yourself in this situation and now you have to get out of it. You’ll have to do something to get this situation resolved.

RENATO– This is the big problem in this situation: the fear you have of losing him. You’re afraid that this situation will end you, that he will change you and return to the ex-wife. That is why you accept this situation. So if you want to resolve, the first change that has to happen is inside you, not in it.

What change has to happen inside you?
First:You lose the fear of losing him.
While you are afraid, you are held hostage by this man who betrays you, who has not decided what he wants out of life, and who is content to think he will have two women. He’s finding himself the last wafer in the package. When you lose that fear of not having that man anymore, then you will have the courage and strength to talk to him frankly and say, ” Sit down, this is the following, I have accepted this situation, but from now on I have taken a decision in my life and you will have to choose between me and our daughter as your new family or go back to your wife and your old family. This is not a request, but it’s a condition I’m giving you. If you do not want to, then please, you can pack your bags. ” What will happen? One of the two, one: he will pack his bags and leave, or he will take shame in his face and say: ” I love this woman and I do not want to lose her, I have already come from a destroyed marriage and I do not want to lose this new one marriage”. Unfortunately, many men do not define themselves because they have not found a real woman yet. I’m not saying it’s the woman’s fault, it’s the man’s fault. But he lacked the encouragement of a real woman to put him on the wall. And because he has not found this woman yet, he feels free to stay a little here and there and thus never change.

*Translated and edited from Kaline Tascin 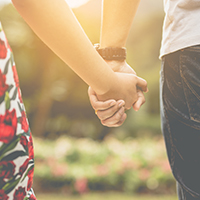 12 Pastors and their wives unite to bless all the couples