I Tried to Numb the Pain…2 min read

Tumlo’s life turned upside down when she discovers that the man she thought as her father was not her relationship father.

‘Finding out the truth about my father made me feel like my whole life had been a lie. I became a very lonely person. I had a void inside me.Then, I was very angry and bitter because of the problems in my family. Things were so bad that I began smoking at 12. 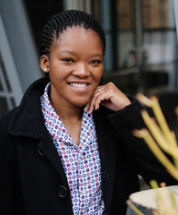 At the same time, she had an outbreak of acne which caused her to be bullied and she began smoking marijuana.

At the same time, she had an outbreak of acne which caused her to be bullied and teased a. lot throughout high school.”The acne was so served that every time I went out, people would give me remedies for the acne. My peers would tell how ugly I was and I had constant headaches.”

Tumelo’s mother was invited to attend services at the Universal Church and after a week, she invited Tumelo as well. At first, she attended the services for the sake of attending until one Wednesday service that caught her attention

“I eventually decided to get baptized in water and leave my old life behind but I still had a void inside me. Then, I understood that I was lacking the Holy Spirit. I made purposes to receive the Holy Spirit. Next, I wanted to know God personally. I engaged myself in a one-week fast and I prayed more.

Then, I attended a night vigil and an altar call was made for those who wanted the Spirit of God. During the prayer, I sought the Holy Spirit like never before, and immediately the loneliness left me. God revealed Himself to me.

Today Tumelo has a good relationship with her mother, is happy and has peace. “I am happy with who I am and I have no reason to go back to my old life. I want others to receive what I received.”