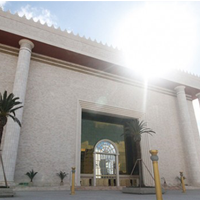 He had an exceedingly abundant life, was prosperous, had a great number of herds and a large number of servants under his care. Kings and nations around him respected him, feared him, and he was seen as a blessing wherever he went. He was a faithful man, and when he was one hundred years old, he saw the miracle of his barren wife Sarah giving him a child. Yes, Abraham saw his long awaited dream come true in proportions that he never could have imagined. All he desired was to have one son, and nations came from him. Today millions of people in this world consider Abraham as the father of faith and look at his example of trust in God as an inspiration to their lives. This happened because God found in him the essential conditions needed to bestow upon him all His promises: he was not bound to anything and to anyone, and he depended fully on God.

“Abraham built many altars and his final altar was on Mount Moriah. God asked of him and he did not deny, and the  Altar did not deny what Abraham was asking for. Faith requires courage; when you live this faith, you do not fear anything or anyone, because your courage leads you to your dream. The Campaign of Israel is about transferring the dependance from what you are and what you have to the Altar, which is to trust in God alone. God does not need anything; He is the owner of all things. However, He wants us to depend on Him.” – affirms Bishop Bira Fonseca in his video series Journey of Faith.

A homeless single mother living with her children in a car

Joan Powell from New York learned from the faith of Abraham and by putting this faith in practice she overcame all her obstacles. “The father of my children wanted to have a daughter. Because I couldn’t give him a daughter, he cheated on me and we separated. I ended up losing everything we had. I had to live in the car with my four boys. I had the option of putting them in foster care, but I wouldn’t do that,” remembers Joan.

In this situation, she began attending The Universal Church and heard for the first time about the Campaign of Israel. “I listened to the bishop keenly and did exactly what he said to do. I wrote a specific prayer request on a paper, because I understood that this challenge was for what we could not achieve on our own, with our strength. For me, that was having a home. Every little thing that I had I put it on the Altar, and I decided ‘it is now or never!’ That was my Isaac; that was my all.”

Today Joan smiles as she speaks about how God has transformed her life and blessed her family. “The Altar has given to me a home for me and my family, and it has given to me a great financial life; I have 7 houses. It has also given to me a blessing for my four boys, because they are all going to college; God has given me condition to pay for their tuition. They are all driving prestige cars. My financial life has been blessed through the Altar. I take part in every Campaign and I see a growth.”

The day of your victory approaches

“The Campaign of Israel is for those who have an impossible case or problem. God is showing you this challenge as a way out. Remember, Abraham was one hundred years old when he became a father.” – says Bishop Bira Fonseca.

In this month of July, over ten thousand bishops and pastors will take our requests to the Temple of Solomon in Brazil, and they will cry out in prayer on behalf of the life transformation of those who believe.

Visit The Universal Church nearest you for information on how to participate in the Campaign of Israel. You can also watch the Journey of Faith daily video messages. The final day of this challenge of faith in the U.S. will be on Sunday, July 12th.