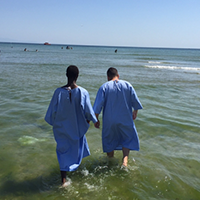 When the water touched his face, he knew he was starting anew. From that moment on, he knew that the Lord Jesus has chosen him to fulfill His Word in his life.

Manuel Seabra was born in Guiné-Bissau, a west-African country neighboring Senegal and meeting the Atlantic Ocean. More than one million people live in Guiné-Bissau.

Education and employment opportunities come with great difficulty like in any other emerging country. For this reason, Manuel decided to move to Turkey.

“I immigrated here with the goal of achieving my dream: to study in a University, Political Science and International Relations; I am already in my fourth year.”

The hardships that came with the changes added to other personal problems almost made him give up on his dreams and on his life.

Manuel suffered from seeing visions and hearing voices. Because he did not know God nor did he understand what those symptoms meant, he fell into a deep depression.

His academic performance fell, and the worst of it all is that he no longer wanted to live. Various times he thought of taking his own life.

When he found nowhere else to go for help, The Universal Church came into the picture.

The Universal Church arrived in Turkey during the beginning of 2015 through Pastor Roberto Azevedo with the aim of taking the Word of God to the people who live there. Because the majority of the population is Muslim, this mission has its challenges and difficulties. However, the unshakeable faith of those involved in this project does not allow the difficulties to become barriers. This faith reached Manuel and rescued his life from ending in hopelessness.

“Manuel arrived at the ‘Beat the Odds’ conference with many problems,” remembers Pastor Roberto. “At the end of the conference, I counseled him, prayed and determined his deliverance, and immediately he was free from all that tormented him.”

During the conversation with the young man, the pastor shared the importance of putting one’s life in the hands of God. Likewise, he also explained the meaning of the water baptism and how this step of faith can change someone’s life. The very next day, Manuel came to speak with the pastor decided.

While standing in the lake in which he was baptised, he had the assurance that each breeze and drop of water brought with it a new opportunity to fight for his dreams, but this time he would base his faith in the Word of the Lord Jesus.

His life was transformed and he could again see himself as a future employee of the Guiné-Bissau embassy in Turkey. In his own words: “Today I am a new Manuel!”